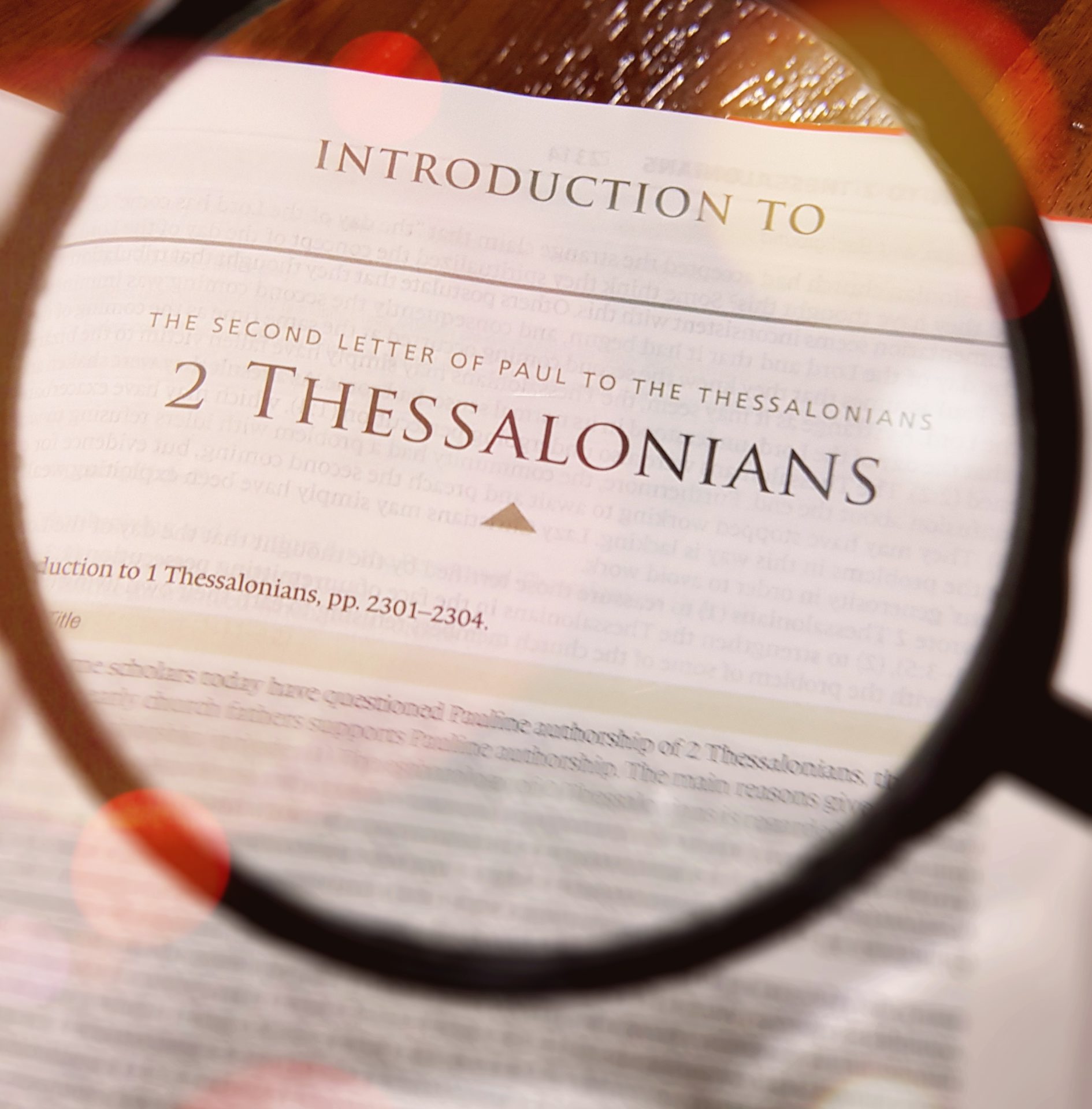 As you know, it's our habit to preach through books of the Bible. We want to continue our steady diet of God's Word because the whole counsel of God is necessary for healthy believers. For this reason, we will begin our study of 2 Thessalonians this morning, and I hope you will find God's Word an abundant blessing to you and your family.

To prepare us to study this letter I want to introduce you to it this morning. The way I will do that is by looking at the 5 W's of 2 Thessalonians.

The Who, Where, When, What, and Why of the letter.

Who wrote it and who was it written to?

Where was it written from?

When was it written?

What did they write about?

Why was it written?

Who Wrote it, and Who was it Written to?

In both letters, Paul identifies himself together with Sylvanus and Timothy as the authors. And both letters are addressed to the church in Thessalonica. Paul used a similar greeting in both which reads,

1 Paul and Silvanus and Timothy, To the church of the Thessalonians in God, our Father, and the Lord Jesus Christ:

2 Grace to you and peace from God the Father and the Lord Jesus Christ.

The second letter has a unique signature to it. In 3:17 Paul felt it was necessary to emphasise the authenticity of this second letter by saying,

17 I, Paul, write this greeting with my own hand, and this is a distinguishing mark in every letter; this is the way I write. (2 Thess. 3:17)

So, it was written by Paul and his companions, obviously with Paul as the principal author. And it was written to those who had become believers during Paul's short ministry in the city.

Let me remind you of some facts about the recipients that we covered when I introduced the first letter to you. The people Paul wrote to had become believers during a short ministry in the city of Thessalonica.

Acts 17 records the highlights of Paul's ministry there. After what seemed to be a fruitful time (17:1-4), things turned sour quickly. From Acts 17:5 we read,

5 But the Jews, becoming jealous and taking along some wicked men from the market place, formed a mob and set the city in an uproar; and attacking the house of Jason, they were seeking to bring them out to the people.

6 When they did not find them, they began dragging Jason and some brethren before the city authorities, shouting, "These men who have upset the world have come here also;

7 and Jason has welcomed them, and they all act contrary to the decrees of Caesar, saying that there is another king, Jesus."

8 They stirred up the crowd and the city authorities who heard these things.

9 And when they had received a pledge from Jason and the others, they released them.

10 The brethren immediately sent Paul and Silas away by night to Berea, and when they arrived, they went into the synagogue of the Jews. (Acts 17:5-10)

So, the believers in Thessalonica knew persecution early on. Also, Paul was forced to leave them with this open wound unattended. You'll remember from the first letter that it was a big deal for him. And his hasty retreat was used by his opponents to discredit him. Well, the second letter was written to the same people, and they were still in the same situation. We see that in Chapter 1:4-5 where Paul says,

4 therefore, we ourselves speak proudly of you among the churches of God for your perseverance and faith in the midst of all your persecutions and afflictions which you endure.

5 This is a plain indication of God's righteous judgment so that you will be considered worthy of the kingdom of God, for which indeed you are suffering. (2 Thess. 1:4-5)

The fact of their suffering is an essential bit of data to remember when we interpret the letter. What Paul writes must be seen in the context of their trials.

Where was it Written from?

Neither of the two letters tells us where they were written from. We gather their origin from the record in Acts 17 and 18. After Paul and Silvanus were chased out of Thessalonica, they go to Berea. But the Jews from Thessalonica make a trip down there and stir up the crowds against Paul again. Luke then tells us that Paul is sent on to Athens while Timothy and Silvanus stay behind in Berea. One assumes that they remain behind because there was work to do, and they could stay. Paul seems to have been the centre of attention for the persecuting Jews. Luke tells us in Acts 17:16 that Paul was waiting for his companions in Athens, but they don't meet up there. It's only in chapter 18 when Paul lands in Corinth that he sees his companions again. Luke tells us that Paul settled in Corinth for a year and six months, and it's from here that he eventually writes both letters.

When was it Written?

Acts 17 and 18 records the latter part of Paul's second missionary journey. Most reliable scholars date this journey during the three years of AD49-51. If we are correct that Paul wrote the letter from Corinth, it would have fallen in the latter half of his journey, which puts us in late AD50 but more probably early AD51.

What did they Write about?

I want to give you my outline of the book here. When you get a bird's eye view through this framework, you quickly see what Paul was trying to accomplish with his letter. The letter has four parts, and the way I have outlined it is to highlight what Paul does in each section and then detail how he does it.

Why was it Written

Praise, comfort, correction, encouragement, and admonition. That summarizes what Paul does in the letter. Now, that sounds very similar to what he did in the first. But, the second letter was written with a different intention from the first letter.

You will recall that the bulk (that is the first three chapters of five-chapters) of the first letter was devoted to encouragement and endearment. Paul needed to make sure that the believers knew how he felt about them and how he longed for them. His sudden departure was the occasion for his critics to attack his character and message. He had to make sure the believers didn't fall for the lies. Paul then spends the last two chapters to address what he felt was still lacking in their faith. That turns out to be ethical teaching on sexual purity, godly ambitions, and instruction on the return of the Lord.

The second letter lays its emphasis on different aspects of the same topics Paul covered in the first letter. That's because something has happened between the first and second letters.

When you read the second letter, it seems that the church in the first instance was still suffering persecution, and they desperately needed encouragement. Prolonged periods of suffering will wear anyone down. And so, Paul encourages the believers by way of applying the doctrine of the end times to their situation. Secondly, they either didn't understand what Paul taught them in the first letter concerning the coming of Christ or someone was directly teaching false doctrine regarding this event. There was possible a forgery making its rounds in the churches that showed a mistaken view of the return of Christ. I believe this could be the reason for Paul's signature he remarks on in chapter three verse seventeen. Therefore, he clarifies and reminds them of his instructions on this topic. Lastly, the idlers Paul aimed at correcting in his first letter were persisting in their sloth. So, he ends the letter by addressing that issue directly this time. And so, his focus in the second letter is on the two areas of what we call eschatology, that is Biblical teaching on the end times, and church discipline.

So, Paul wrote this second letter to encourage suffering believers, correct false doctrine, and train the church on how to discipline idle and disobedient believers.

Over the last four years, we have studied the letters of 1 peter, Titus and James. When you look at the historical background of these books, there's a theme that ties them all together. This theme is present in just about every book in the Old and New Testament. And it is present here in the letter of the Thessalonians as well; Suffering. From Genesis chapter 3, suffering is one of the dominant themes that span right through the whole Bible. It is what defines human existence in a fallen world. Because suffering is such a shared human experience, we find so much in common with the people of the Bible. And it's going to be no different here with the second letter of Thessalonians. Yes, we may not be persecuted for our faith like they were. But the principles and truths Paul uses to encourage those believers will be as relevant and helpful to us as they were to them. I think they will be especially important in our present crisis. So, I want to encourage you to take the outline you have in the notes and begin your personal study in preparation for our series. May God the Holy Spirit apply the truths of this letter to your heart in fresh ways in the coming months.